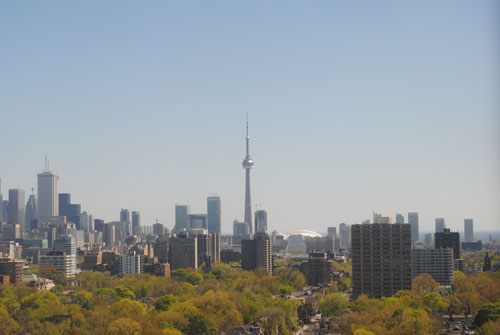 When one thinks of Canada; Maple Syrup, Moose heads and a country crazed by the idea of hockey on ice comes to mind. Or at least it did to me, when I decided to pack up and ship off there for six months on a student exchange. Toronto was my city of choice as it was the most populated city in Canada. I wanted big city life! What I didn’t realise is that Toronto is a secret and unspoilt melting pot of culture, eccentricity and acceptance, that would provide a magical and at times otherworldly backdrop to my experience.

Much like New York is cited as the fifth girl in the Sex and the City franchise, Toronto was the weird, kooky and sometimes creepy friend that accompanied me on my four months of study. Toronto welcomes you with both arms wide open. Even the homeless will shout you some compliments!

Toronto is one of the most diverse cities of the Northern Hemisphere and supports much of Canada’s economic growth. It is an interesting place, where the sleek and silvery pointy buildings of the financial district meet with rundown and yet charming suburbia. Vast and colourful paintings and graffiti loom behind nearly every bend in the road and add much needed colour in the depths of winter, when the city is drenched in white.

The streets of downtown T.dot provide a perfect milieu for people watching. It seems every passerby may be of a different origin. The girl who sat in front of me in marketing class wore a hijab of vibrant blues and golds; our teacher was Jamaican. On my walk to uni I was, more often than not, accosted by a group of African American men, wearing enough bling that Kanye himself would be jealous; ‘Shorty what’s your naaaame!?’ And then, on my walk home I might find myself running into a very tall Cher, or a “police man” in leather chaps taking a dusk stroll through the Gayborhood; a neighbourhood lined with gay bars and establishments not one block from my residence.

The rainbow hued street signs and theatrics of this strange gay playground are not for everyone. A less overwhelming option lives in the heart of Kensington – Kensington Market. It is here the real ethnicity of this Northern American city really comes into its own. Fruit and veggie stalls spill onto the side walk, men in Jamaican garb coerce street dwellers to take a whiff of their ‘herbal’ delights. A sidewalk sign will proudly announce ‘free bong with purchase!’, and the stench of the cheese shops’ fill the air. Many an afternoon was spent munching on a ‘Big fat Burrito’ or at the European butcher, ordering a burger for a Toonie (Canadian for $2). A Ukrainian lady would make it with her un-gloved hands. She was always liberal with the ketchup.

If Toronto where a person she would be a hippy, with a father from Kenya and a mother who moved to T.dot as a teenager from another exotic place. Beautiful, creative, maybe a little scruffy around the edges. Yes, Toronto would be a hippy, one you would most likely want to get to know. She would beckon you with the promise of breathtaking changes of season.

Toronto is a city with a heartbeat. You can feel it in the rumblings of the underground subways that run through the night. And In the constant street traffic on Yonge Street or, in simply the buzz of the neon signs that point to late night food haunts. One such haunt, perched on the corner of Yonge is Big Slice Pizza bar, where if you are lucky, amongst the drunks and the homeless you might stumble

upon a group of exchange students. They’ll be on their way home from another night of mischief. Revelling in a new and exciting city.

We come from different nations and different parts of this beautiful country. We’ve united to bring you this edition. Meet …

Want to shake up your brekky routine? Then gives these eggs a fry. The humble egg is packed full of …